Farmland to factory in industrializing India 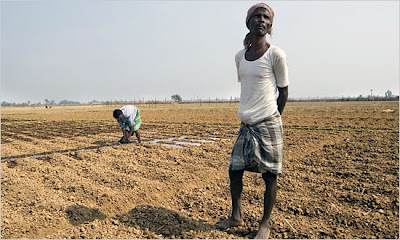 CALCUTTA: Just beyond the city limits, a patch of land where an auto factory is planned amid a sprawl of potato fields and rice paddies has become a battleground for the world's longest-running democratically elected Communist government.

This government of West Bengal State plans to turn over about 400 hectares, or 1,000 acres, of fertile farmland to one of the country's largest industrial conglomerates, Tata Group, for a factory that will produce a fleet of small, low-cost cars for India's growing middle class.

How the land was acquired is a matter of red-hot contention, igniting crippling demonstrations, hunger strikes and occasional violent conflicts. The government says that most of the landowners consented, but opponents charge coercion.

Land is one of India's scarcest resources. So how this fight plays out is likely to hold far-reaching lessons to India as a whole, as it tries to balance the demands of industrial growth with the needs of those who rely on agriculture. Across the country, steel mills, power plants, roads, ports and hundreds of so-called special economic zones are planned, all of which will require state governments like this one to acquire vast swaths of land.

On one side of the conflict here is, improbably enough, the Communist Party of India (Marxist) and its leader, Buddhadeb Bhattacharjee, chief minister of West Bengal State, for whom the auto plant at Singur, 35 kilometers, or 22 miles, west of Calcutta, represents the beachhead of industrial resurgence.

It is difficult to overstate the importance of this project to Bhattacharjee. He wooed Ratan Tata, the Tata Group chairman, and has expressed confidence that critics will be silenced when the first car leaves the factory. He says it will bring investment and jobs.

To that end, the state government has fenced off the land, deployed hundreds of police officers and private guards on its perimeter, and, to stave off protests, banned assemblies of five or more people in villages nearby.

The stakes for Bhattacharjee, 62, a Communist Party stalwart who has of late aggressively courted private investment, could not be higher.

"All leading investors are closely watching whether the government will fail to start this project," he said in an interview. "For us, there is no space. We just cannot roll back. It will send a bad message all over the country and the world."

His message is stark and simple: West Bengal, a symbol of strife and ruin for more than 30 years, whose capital, Calcutta, Rajiv Gandhi, the former prime minister, once called "a dying city," is once again open for business.

It is for this reason, not to mention his party's iron hold on this state since 1977, that Bhattacharjee is sometimes regarded as the Chinese-style leader among Indian Communists.

He has embraced privatization of state-run enterprises. He has scolded trade unions. He has criticized the general strikes that shutter this city for at least a couple of days each year. He has welcomed foreign multinationals. Money, he declared this year, has no color.

"We committed some mistakes in the past," he said of the Communist tenets of yesterday. "Now I can humbly say our policy has changed."

Bhattacharjee's government sees the car plant as "the flagship project" of a rising West Bengal.

His critics, who range from the political opposition to advocates of peasants' rights, are equally confident that the industrial project will bring ruin. They accuse Bhattacharjee of railroading people into selling their farmland and of neglecting those who survive on it, chiefly laborers and sharecroppers.

That the land here is particularly rich, at times producing three or four crops a year, has made the fight more intense. In recent weeks, protests against the project have spilled into Calcutta, further snarling traffic in the city center and, in December alone, prompting three general strikes.

Tensions flared in mid-December, when the body of a teenage girl who had protested the project was found inside the fenced perimeter of the factory site, strangled and burned.

In Singur, a village pressed against that fence, resignation is mixed with rage. Graffiti on the side of one building screams: "Look around. Identify the stooges of Tata."

Singur is sharply divided between those who said that they agreed to sell their land and those who held out. The happiest are those like Nimai Chandra Mukherji, 71, a retired civil servant, who long ago gave up tilling his land and rented it to sharecroppers.

The bitterest losers are those like Sukumar Malick, who make their living by tilling other people's land. Malick said he did not expect the landowner to share the proceeds. "They didn't inform us, they didn't ask us, they just took the land away," he said.

As in many villages across the country, the people here readily acknowledged that agriculture did not make them rich. Those families with some means sent at least one breadwinner to work elsewhere.

Still, they spoke of the land. It was basic sustenance to some, family savings to others.

Sheik Tahir Ali, 64, and Sheik Sayeeb Rehman, 45, who are brothers, said they gave up their property only after police officers had come to their door and told them that their land would soon be fenced off. The brothers hurriedly picked the last of their rice harvest, signed consent letters and collected their checks.

Gautam Kolay, 39, was among the last holdouts. He recalled when state officials came to the village with bullhorns and police escorts, urging farmers to collect their checks. By early December, fencing began, and his family's property, about half a hectare, was encircled. He cannot get to his land but has refused to consent.

"What our grandfathers cultivated, we are cultivating," Kolay said. "This is for our future generation. It won't fly away. If I take money, how long will it last?"

Because of the troubles at Singur, Tata Motors, a Tata Group subsidiary, is behind on its construction schedule. A spokesman for the company, Debasis Ray, would say only that construction would start "very soon" and that the company would meet its target of rolling out the first car by 2008.