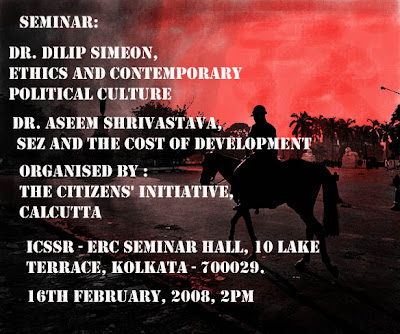 We, at The Citizen's Initiative, are trying to organize a continuing open discussion on the paradigms of development and the relationship, in this context, between politics and ethics.

These issues, we feel are extremely important given the kind of state sponsored violence that people are facing all over and particularly in . Needless to say, that this effort on our part comes from being in the shadow of the recent events in Nandigram but we hope that this will only be the beginning of a larger long-term movement. The Citizen's Initiative comprises mostly students, researchers and teachers who have been feeling the need for such a non-party political platform to address these issues. We plan to launch this initiative with a panel discussion in early February on "Development and Political Culture".

Dr. Aseem Shrivastava SEZ and the Cost of Development

Dr. Dilip Simeon taught history at for several years. He has been a research scholar at the Centre for Social Studies, , the of in Brighton, the of , and the Institute on Asian Studies in , . In 1994-95 he was a Visiting Fellow at the Department of History, . His writing focuses mainly on labour history, politics and violent conflict and his published works include the book: The Role of Labour Under Late Colonialism (, 1995). In 2001, he became the Director of the Aman Trust which works to understand and reduce violent conflict. He is currently a Fellow at the and Library in .

Dr. Aseem Shrivastava has a doctorate in Economics from the of at . He has taught Economics at various universities in the and and Philosophy at in . He is an independent writer who writes on various contemporary themes like globalisation, human rights and foreign policy.

A Note on Our Thoughts:

The recent events in Nandigram have left many of us shaken.

But fortunately, they have also provoked continuing debates and questions about the cost of development and the growing schism between ethics and contemporary political culture. Questions have also begun to arise on the unquestioning equation of the 'partisan' with the 'political', and the brushing aside of any non-partisan civil political action as not just irrelevant, but, as some would say, 'anti-political'. The role of the civil society in a democracy is a subject of critical re-examination now.

We are a group of students, researchers and teachers who have been meeting to discuss these issues since February 2007. We have our blog: www.development-dialogues.blogspot.com .

In the days immediately following the Citizens' Silent Protest March that took place in Kolkata on the 14th of November, 2007, a few young students and researchers came together (mostly on online forums) to discuss what this event had meant for them and to talk about possible ways forward. The numbers steadily grew and within a week we had close to 200 young members on two separate forums. There were heated discussions.

We all agreed that a spontaneous non-partisan rally of this magnitude (the number of participants was reportedly close to a lakh) meant that we had indeed witnessed something unusual. But even so, most of us felt that this should be the beginning of a movement towards a continual life practice - rather than just a token protest that is soon forgotten. We also felt that what happened (and is perhaps still happening) in Nandigram is a symptom of a larger malaise, and that our work does not end with so-called "normalcy" returning to Nandigram.

In the last two months, The Citizens' Initiative has met in small groups several times to discuss what it may do in order to keep alive the memory (and the present critical reality) of Nandigram and through it the critically important debate on development. Some of us also visited Nandigram on a fact finding trip on the 24th of November. The Interim Report from this visit has been released ( http://development-dialogues.blogspot.com/2007/11/interim-report-of-independent-citizens.html) , and a detailed report with the testimonies (of the villagers interviewed on the day) is due for release soon. This January some of us are going to Nandigram again for a follow-up visit that seeks to ascertain how things have changed over the last two months. We plan to follow this up with regular fact-finding visits to Nandigram and other affected places in .

We sincerely hope that this will set the tone for things to come - more discussions, debates and also concrete acts to redress the wrongs being perpetrated by the government and the political parties against the people.

We are also planning a trip to Singur as well so that we can assess the situation for ourselves. As Singur has gone away from the public spotlight (and in the wake of Tata Nano, the little coverage that Singur gets, addresses issues of a different kind), such a fact-finding enquiry and report may help to bring to the forefront the demands that the residents of Singur may be making to society at large.

(On behalf of The Citizens' Initiative, Kolkata)